Group leader Johannes E.R.Hov was awarded Early Career Award by the Scientific Advisory Board of Oslo University Hospital. The official ceremony took place on Friday, May 5th 2016 at OUS, Rikshospitalet.

We congratulate Mette Vesterhus and Johannes Roksund Hov on the Oslo University Hospital’s prize on outstanding original article they won with:

All award winning articles were published in the second half of 2015. The awards are of NOK 50.000,- and are earmarked for further research activities.

To make research a visible part of Oslo University Hospital (OUS)’s activities and to inspire all employees to publish their scientific findings OUS has established this tradition to award the authors of the best publications in every sixth month.

Group leader Espen Melum was awarded Early Career Award by the Scientific Advisory Board of Oslo University Hospital. The official ceremony took place on Friday, May 27th at OUS, Rikshospitalet. 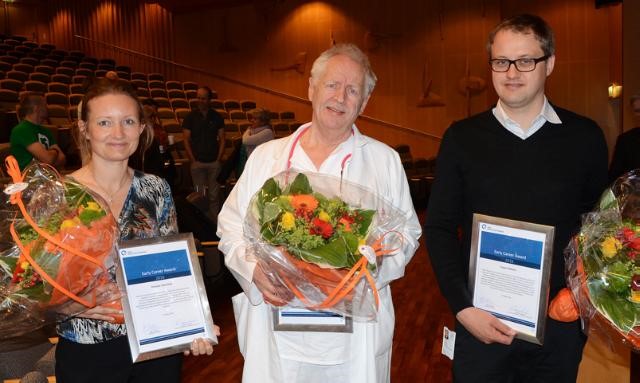 The gut microbiota of patients with primary sclerosing cholangitis (PSC) has low diversity and is highly different from both healthy individuals and inflammatory bowel disease patients without PSC, according to a study by Martin Kummen and co-workers, which is now published online in the prestigious journal Gut (journal impact factor 14.66).

The study represents a milestone at Norwegian PSC Research Center, being the first entirely based on in-house methodology, and also providing an important starting point for studies on the clinical application of gut microbiota in this disease.